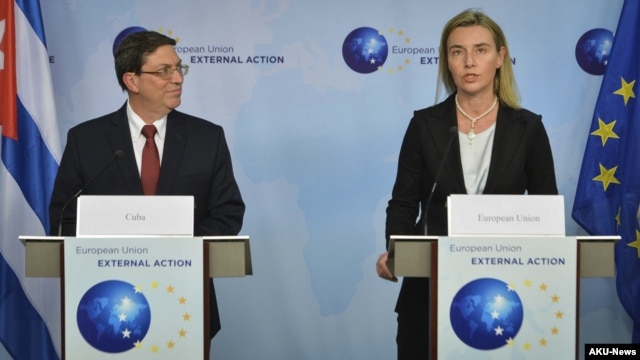 Remarks by the High Representative and Vice-president Federica Mogherini at the press conference with Cuban Minister for Foreign Affairs, Bruno Rodriguez Parilla

First of all, it has been really a pleasure to welcome you in Brussels, less than a month after my visit in Havana. And I would like to thank you and President Castro for the very warm welcome I received and the very fruitful meetings we had in Havana, and also the good chance we had of meeting again in Panama at Summit of the Americas just a few weeks ago.

Today we restarted formally our political dialogue even if we have been meeting quite often in these last months. The last meeting of the formal political dialogue took place in 2011 so I am proud to re-launch this process as I am convinced that there are many areas in which the European Union and Cuba can have a fruitful cooperation in our mutual interest.

We had the chance today of sharing views on the main political issues that are relevant for the EU and for Cuba. First of all, we discussed the follow-up of the Summit of the Americas, the regional development in Latin America and the Caribbean, the situation in the region as a whole and in some of the countries in a specific way. And we prepared the EU-CELAC summit that we will host for the first time in Brussels in June and where we hope we will be able to welcome you again.

We also discussed the issues that are most important for the EU in these times, in particular the situation in the Mediterranean, we discussed the tragedies that we are facing in the Mediterranean at sea, not only in terms of migration but also the challenges that we have all around us, the many dramatic crisis we have from the one in Libya to the situation in the Middle East and in Ukraine. We also shared views on ways of cooperation at multilateral level on global issues like climate change and the post-2015 development agenda, knowing very well that these are also ways of preventing conflicts and poverty, and so easing situations before they blow up in dramatic ways.

As it comes to our bilateral relations, as you know, we are negotiating a political dialogue and cooperation agreement. We had the chance of discussing this already when I was visiting Havana, where we expressed our willingness to strengthen and intensify our relations also by accelerating our negotiation process. We agreed on having the next round of negotiations in June and to have it followed by other rounds so that we can try to finalise the agreement by the end of the year.

We also agreed to establish a structured human rights dialogue. First meeting will take place in Brussels, in June, followed by others. On the European Union side I will ask the European Union Special Representative (EUSR) for Human Rights Stavros Lambrinidis to work at that and to follow the process at this level in a dedicated way.

Let me conclude by saying that we know it is an interesting time for all Latin America and Caribbean - it is an interesting time also for Cuba, maybe even more than the rest of the region for Cuba. Our friendship and our close ties are there to accompany our challenges but also our opportunities. In these times, Europe has more challenges than you have and you have more opportunities than we have. We accompany each other in these difficult times for all, and in these interesting times for all, strengthening even more our relationship.
_________________
"..non dovete esssere egoisti e pensare con la pinguita
dovete pensare il bene del populo cubano.."